Screen time is a part of most people’s lives, for better or for worse. Resources like smartphones, tablets, and laptops help us connect to loved ones and gather information at the touch of a button. However, reliance on these devices and extended use throughout the day can pose some negative effects for both adults and children. In this article, we explain what the negative impacts of screen time are for all members of your family. 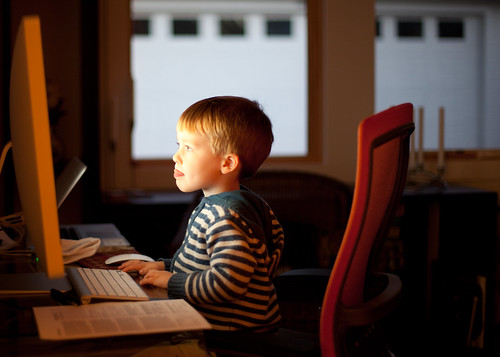 Did you know that the average teenager spends up to nine hours a day staring at a screen?

It’s not only teens and young adults that struggle with too much screen time. Even children younger than eight spend nearly 2.5 hours every day looking at a tablet or smartphone.

The connection between children and electronics doesn’t appear to be going anywhere anytime soon. Of course, some technologies have made our modern lives easier.

But are there any negative effects of screen time parents should be aware of? Are there any connections between electronics and child development issues?

In this section, we’ll take a look at three negative effects of screen time in children.

Do you feel annoyed when your phone wakes you up at night?

Imagine how exhausted your kids must feel when they spend half the night responding to texts and tweets. An endless stream of notifications throughout the night disrupts the sleep they need to avoid burnout.

As if that’s not enough, electronic devices also emit powerful blue light that “tricks” the brain into thinking it’s daytime. This makes it harder to fall (and stay) asleep, and it’s connected to many physical and mental health problems.

Does your child become grumpy or irritable when they spend too much time on electronic devices? Does he have trouble focusing or is he always hyperactive?

Excessive screen time could be a contributing factor to ADHD. Too much screen time can overstimulate a child’s mind (this happens to adults too). When they don’t receive the validation they’re hoping for in the form of likes, clicks, or comments, their self-esteem may plummet.

Even worse, new research shows that constant exposure to electronics increases the likelihood of depression, anxiety, and even suicidal thoughts. Although technology appears to bring people together, in reality, it has an isolating effect.

Children who spend too much time on electronic devices may fail to develop normal social skills. They may struggle to make “real life” friends or, as they get older, hold down a job, or get involved in the community.

Here’s a terrifying statistic for parents everywhere: 33% of children are exposed to a pornographic website before the age of 10.

Pornography isn’t the only concern, either. There’s a vast amount of websites that perpetuate  — even glorify — dangerous mental health disorders. Some sites promote eating disorders, cutting, or other forms of self-harm. Others serve to destroy the fragile body image of developing teens (girls in particular).

The more time your child spends on the internet, the greater the likelihood of exposure to detrimental images and ideas.

Teens spend 9.5 hours a day on phones or laptops, and little kids spend 2.5 hours in front of a screen. Adults, it turns out, are the worst offenders — spending up to 11 hours a day in front of a phone, television, computer, or tablet.

A Pew Research Center study from 2018 showed parents are concerned about their own screen use as well as the screen time of their children. They’re right to be worried — screen time use has negative effects on adults just as it does on children. Here are three of the most common side effects of screen time on adults.

Have you noticed the longer you spend playing games on your phone, the harder it is to concentrate? You’re not imagining it. Studies show that screen time can negatively impact brain function.

With extended screen time in adults, doctors and researchers see a decrease in the cognitive ability of some adults. Those that play addictive games experience a decrease in the efficacy of the frontal lobe, which controls impulses and manages planning and organization functions. Additionally, excessive screen time can lead to a dependence on the device. This sort of addiction often impairs dopamine delivery in the brain, causing a strong need to get on the phone, tablet, or computer despite any consequences.

Not only can sitting in front of the TV make you feel like a couch potato, it can turn you into one.

Neck and Back Pain

You know that headache you have at the end of the day? It’s not just from lack of caffeine or the harsh light of a computer screen. It could be from how you’re holding your body while working on your devices.

Doctors and researchers have found that adults who spend a lot of time on their cellphone, tablet, or computer often have poor posture. Extended use of these devices can lead to detrimental effects on neck and back. This, combined with lack of exercise, can lead to long-term, serious back and neck issues, requiring therapy or possibly even surgery to correct.

While technology has improved our lives in some ways, there are negative effects of screen time that we can’t ignore.

If you or your child are struggling with any of the symptoms outlined above, it could be from too much screen time.

Wondering what you can do? Contact us today to learn how to improve your family’s developmental, behavioral, and emotional health.

Did you know that the average teenager spends up to nine hours a day staring at a screen?

It’s not only teens and young adults that struggle with too much screen time. Even children younger than eight spend nearly 2.5 hours every day looking at a tablet or smartphone.

The connection between children and electronics doesn’t appear to be going anywhere anytime soon. And, of course, some technologies have made our modern lives easier.

But are there any negative effects of screen time parents should be aware of? Are there any connections between electronics and child development issues?

In this post, we’ll take a look at three negative effects of screen time in children–and what you as a parent can do about it.